Paris is the capital and the largest city in France. Situated on the river Seine, this beautiful city is one of the most populated metropolitan areas in the world. It is also one of the most expensive cities. However travel to Paris is a wonderful experience.

Here is a brief overview of some popular tourist attractions in Paris.

Very few people would not have heard of this magnificent structure. This puddled iron lattice tower is located on the Champ de Mars in Paris. You can have a marvelous view of the city from the top of the tower. Eiffel Tower is considered to be the global cultural icon of France. 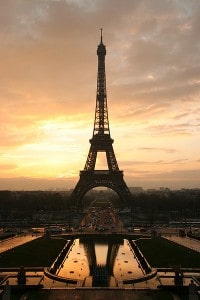 It is the official residence of the president of France. This heavily guarded palace is constructed in the French classical style. It is well-known for its beautiful gardens, where the president hosts a party on the afternoon of Bastille Day.

Also known as the Norte Dame Cathedral, this Gothic Roman Catholic Cathedral stands as a symbol of the French Gothic architecture. It was among the first buildings to use the flying buttress.

This major public square is the largest in Paris. At each of the eight angles of the octagonal Place, you will find a statue. A giant Egyptian obelisk is located at the center of the square. You will also find two beautiful fountains here.

It is a popular square in Paris that straddles three arrondissements. It was built between 1370 and 1383. The July Column stands at the center of the square. It is used for concerts and other public events.

This famous recreation resort is located in the suburbs of Paris. You will find two theme parks, dining area, a retail outlet and seven Disney-owned hotels in the complex. It is approximately 32 km from the center of Paris.

This beautiful opera house has a capacity to seat 1,979 people. It is used regularly by the Paris Opera for ballet. Some experts consider it to be the most famous opera house in the world.

This royal castle is located in the town of Vincennes. It is surrounded by a deep stone-lined moat. The castle has six towers and three gates.

Paris is a beautiful city. Hitler is supposed to have ordered his soldiers not to bomb the city during the Second World War. Visit to the above mentioned tourist attractions in Paris is sure to be an exciting and a memorable experience.