Israel is a prominent nation in the Middle East. Jerusalem is the capital and the most populous city in Israel. It is also one of the oldest cities in the world. The nation enjoys the highest standard of living in the Middle East. Israel has a temperate climate. It offers many archaeological and historical sites, and beaches to its visitors.

Here is a brief overview of some tourist attractions of Israel.

The Church of the Holy Sepulchre

Located within the Christian Quarter of the walled Old City of Jerusalem, this church is venerated by Christians. It was here that Lord Jesus Christ was crucified. It is an important pilgrimage destination for the Christians.

Established in 1953, it is the nation’s official memorial to the Jewish victims of the holocaust. It is the largest holocaust museum in the world and contains the world’s largest repository of information on the holocaust.

Masada is located in the Southern District of Israel. You will find ruins of many palaces and forts here. The site was excavated between 1963 and 1965. Even though cable car service is available, it is advisable to hike up the snake path on the eastern side of the mountain.

Tel Aviv is to Israel what NYC is to the US. It is the commercial and the cultural center of the country. Founded in 1909, this young city is well-known for its nightlife and beaches. Neve Tzedek, Tel Aviv Museum of Art, Hacarmel Market and Park Hayarkon are other attractions of this city. 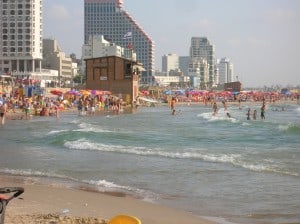 This ancient village in the Jerusalem District is well-known for its churches and monasteries. John the Baptist was born here. It is considered to be a holy site by the Christians.

Also known as the “Sea of Salt” the Dead Sea has a density of 1.24 kg/L. You will literally float on the waters of this sea. It is located 1,300 feet below sea level. Biblically is was the place of refuge for King David.

It is the largest of the three craters located in the Negev Desert and is shaped like an elongated heart. It geological formations are unique. The crater is 40 km long, 500 m deep and 2-10 km wide.

This reputed institute stands as a symbol of modern Israel. It houses the particle accelerator. You will get a rare glimpse into the fascinating world of science and research here.

Israelis the perfect blend of the ancient and the modern. Israel travel is an exciting and a memorable experience.