Located on the west coast of the US, San Francisco is the leading cultural and financial center of Northern California. Founded in 1776, this beautiful city is the most densely settled large city in California. San Francisco is famous for its hills. There are more than 50 hills within city limits.

San Francisco is one of the top tourist destinations in the world. Here is a brief overview of some popular tourist attractions in San Francisco.

Administered by the National Park Service, the Golden Gate National Recreation Area is one of the most visited units of the National Park system in the US. It contains many popular tourist attractions like Alcatraz, Muir Woods National Monument, etc.

Also known as the SFMOMA, it was the first museum on the west coast devoted to modern and contemporary art. Founded in 1935, this museum exhibits the works of both modern masters and younger, less established artists.

This engineering marvel is one of the world’s most beautiful bridges. It is well-known for its signature orange color, tremendous towers, sweeping main cables and Art Deco styling. 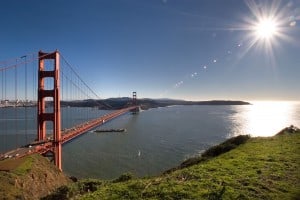 Located in the San Francisco Bay, it is also referred to as “The Rock.” Visitors can reach the island by ferry ride from Pier 33. Abandoned prison, seabird colony, rock pools, early military fortifications and the oldest operating light house on the west coast of the US are some tourist attractions of Alcatraz Island.

It is the largest ChinaTown outside Asia. Established in 1848, it is also the oldest ChinaTown in North America. The restaurants here are considered to be the birthplace of westernized Chinese cuisine. China Town has served as a backdrop for many popular movies like “In Pursuit of Happiness”.

Here you can be assured of a night full of laughter and sensational entertainment. Owner magician Peter Morrison blends magic and comedy in his shows.