Istanbul is the largest city in Turkey. It is a major Turkey tourism attraction. Located in north western Turkey, Istanbul is a rising star as a travel destination. The city has a Mediterranean climate.

Istanbul is well-known for its towering minarets, underground Byzantine cisterns and steamy bathhouses. Here is a brief overview of some popular tourist attractions of Istanbul.

This historical mosque is popularly known as Blue Mosque. This is because blue tiles adorn the walls of its interior. The design of this mosque is the culmination of two centuries of both Ottoman mosque Byzantine church development. 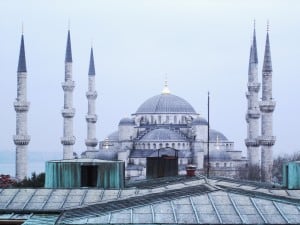 This large palace was the primary residence of the Ottoman Sultans for around four centuries. Today it houses important holy relics of the Muslim world, Mohammed’s cloak and sword.

It is the largest of the many ancient cisterns that are located beneath the city of Istanbul. This cathedral size cistern is approximately 138 m by 64 m. The cistern was used as a location for the movie “From Russia with Love.”

Located on the European coastline, this palace was the administrative centre of the Ottoman Empire from 1856 to 1922. The palace is famous for its crystal staircase. It has the shape of a double horseshoe.

This structure was originally a church, later a mosque and now a popular museum. It is famous for its massive dome. Hagia Sophia is considered the epitome of Byzantine architecture.

It is a group of three archaeological museums: Archaeological Museum, Museum of the Ancient Orient and Museum of Islamic Art. They house more than one million objects related to the history of our world.

This Byzantine church is located in the Edirnekapi neighborhood. The church was converted into a mosque in the 16th century. Today it is a museum. The interior is covered with frescoes and mosaics.

It is one of the largest and oldest covered markets in the world. It has 61 covered streets and more than 3000 shops. Located in the district of Faith, it attracts hundreds of thousands of visitors daily.

Istanbul contributes significantly to Turkey tourism. Visit to the above-mentioned tourist attractions of Istanbul is sure to be a memorable one.