Archives For trip to china

China is a huge country with diverse landscape. It is also the most populous country in the world. China has a rich cultural heritage. Beijing is the capital of China.

Here is a brief overview of some popular tourist attractions in China.

Shanghai is the largest city in the world by population. This megalopolis stands as a symbol of modern China. Located in eastern China, it has many tourist attractions like The Bund, City God Temple, Shanghai Museum, Fuxing Park and Yuyuan Garden.

Beijing is the capital of China. Located in northern China, this megalopolis is well-known for its temples, palaces, art galleries and universities. Forbidden City, Beihai Park, the National Museum of China and the Summer Palace are some tourist attractions of Beijing.

The Great Wall of China

This major tourist attraction was built more than 2000 years ago, along an east to west line across the historical northern borders of China. It is made of stones, bricks, tamped earth, wood and other materials. Most part of the wall was built during the Ming era. 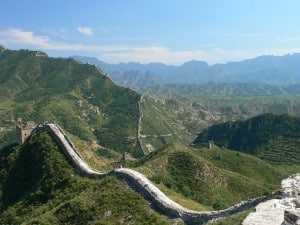 This complex of religious buildings is located in the southeast part of Central Beijing. This beautiful structure was constructed in the 15th century. It comprises three main groups of constructions. All the buildings have dark-blue roof tails, representing heaven.

Located in the middle of Beijing, this structure served as the imperial palace during the Ming rule. This palace is now called Palace Museum where you can find beautiful porcelain ware, paintings, sculptures, seals, court documents, ancient books and much more.

This non-profit research and breeding center for pandas is located in Chengdu. Founded in 1987, its goal is to be a world-class research facility, conservation education center and international educational tourism destination.

This palace is located in Lhasa and was the residence of the Dalai Lama till he moved to Dharamsala, India during the 1959 Tibetan uprising. Copper is poured into the foundation of the building to protect it from earthquakes.

This protected area is located in the Wenchuan County. You can find more 4.000 species of fauna in this famous nature reserve. These include giant pandas, golden monkey, red pandas and white-lipped deer.

China is an amazing country. Trip to China is sure to be a memorable one.