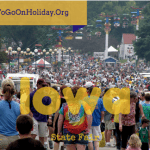 Iowa is often neglected by tourists because of how rural and non-Big-Night-Life it can seem to someone who’s accustomed to places like San Francisco, LA or New York.

But Iowa has much to offer those who actually want a taste of the slow life, and the Hawkeye State’s the right place to be for both “down-home” county-fair-like festivals, and the big ones that just can’t help but be mentioned because they draw lots of people.

Here are just a few to get you started:

Now, June is already over, so you’ll have to wait till next year, but Des Moines’ big annual art festival near the Des Moines River is not an event to miss. They pull artists of all stripes in from all over, and it’s at that perfect time of year when it’s still spring-like but tipping towards full-on summer. And because the festival is held near downtown, you get a chance to experience the night life after the art vendors have closed up for the day.

What kinds of art are featured? Pretty much anything you can think of—from pottery, to paintings, to jewelry, fabric art, and even wood carving. It’s a visual smorgasbord, and a feast for the nose as well, as many food vendors come to provide hungry festival-goers with tasty treats. If you’re an art lover and want a laid-back party atmosphere, come to Des Moines’ art festival, which usually occurs the second week of June.

This was mentioned in the first article about Iowa, and it’s such a big deal that it deserves a second mention. Considering the fair is starting in just shy of three weeks, on August 13th, and ending ten days later, here’s a small lowdown on what’s happening this year: 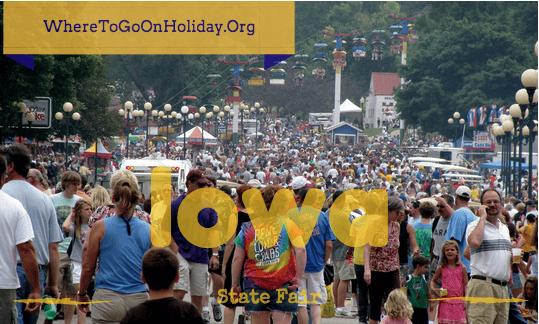 The Grandstand is one of the major things going on with world-famous acts coming in and playing. Carrie Underwood is one of them, as is Reba McEntire and Def Leppard.

There are three permanent attractions at the Fair that you absolutely cannot miss: 1) the Sky Glider, a ski-lift-like ride that goes across the fairgrounds giving you an amazing view of the place from up above. 2) The “Ye Olde Mill,” a “tunnel-of-love”-type ride that’s been at the Fair since the early 1900s. 3) Giant Slide. This is actually something of a new thing, but definitely give it a go!

If you’re interested in agriculture at all, then hit the Ag Building for a taste of what goes on in Iowa’s agricultural scene: from the bee exhibit (they sell honey-sticks that would make Winnie-the-Pooh drool, it’s so delicious!), to the ever-famous Butter Cow sculpture that’s been an Ag Building staple since 1911. There have been four main sculptors up till 2006, when a fifth sculptor, Sarah Pratt, who apprenticed for 15 years under the fourth sculptor, Norma “Duffy” Lyon, took Norma’s place. In addition to the Butter Cow, Sarah has sculpted “Superman,” from “Superman Returns,” in honor of Norwalk, IA native Brandon Routh, that dead-ringer-for-Christopher Reeve who donned the cape and tights for the role. (Hey, no matter what Iowans thought of the movie, we loved that an Iowa native got chosen to be the last son of Krypton!)

And this is just a mere taste of what goes on at the Fair.

If you love big band music from the 1940s, you can do no better than to come to the Glenn Miller festival in Clarinda. The festival happens in early June to honor the memory of Glenn Miller, who went missing in action during WWII while directing the Glenn Miller AAF band.

As you might guess, this is an event to honor the anniversary of American Independence, and it happens from late June to early July. It’s been a popular event for nearly 30 years, with all kinds of attractions including classic rock concert nights, lots of wonderful food, and of course, a patriotic pops concert, concluding with night-time fireworks on July 4th.

What is RAGBRAI? It’s the oldest and largest touring bicycle ride in the world, and it happens in late July. It’s a 7-day, 500-mile-long trek across Iowa, and it’s sponsored by the Des Moines Register, the newspaper from Des Moines that’s read by thousands of people. Hence the acronym’s meaning: Register’s Annual Great Bike Ride Across Iowa. Towns across Iowa that get chosen as part of the riders’ overnight and daytime ride-throughs pull out all the stops to make sure the riders are welcomed with open arms, treated to parties, music, and of course, plenty of food, drink and places to put their heads for the night. You could easily say this is probably the biggest statewide festival next to the Iowa State Fair, only it’s a lot more mobile—and there’s no butter cow.

If you love hot air balloons, and of course, hot air balloon races, come to Indianola, just ten minutes south of Des Moines in late July through early August to see the widest array of hot air balloons from all over the world. It’s an event that’s been hopping and happening for nearly fifty years!

It’s not just about balloon races though. It’s an event that includes balloon rides, kids’ activities and more! But even if you don’t take a ride yourself, just spread out a blanket and watch the beauties float against the blue Iowa sky. And yes, you just might find yourself humming the old Captain & Tenille song: “Up Up & Away…”

These are just some of the many, many festivals happening around the Hawkeye State. You definitely won’t find anything like these events in too many other places. As the motto for this year’s State Fair goes, “Nothing Compares.” If you truly want to get away from the larger cities and want to experience a slightly slower pace, come to Iowa for one or more of our yearly festivals. We’d love to see you there!