Algeria is a country located in northwest Africa. It is the largest country in Africa and an authoritarian regime. Algiers is the capital and the most populous city in Algeria. Islam is the predominant religion and Arabic the official language of Algeria. Algeria travel experience in unique.

Here is a brief overview of some popular Algeria tourism attractions.

Located in the Sahara Desert, this UNESCO World Heritage Site is well-for its prehistoric cave art. You will find more than 15,000 drawings and engravings. The geological formations appear like forests of rock.

This mountain village is a UNESCO World Heritage Site. It is located in the northern coast. The designers of this village have adapted Roman architecture to a mountain environment. You will find temple, theater, arches, two fora and basilicas in this village.

This town was a Roman colony. It is a UNESCO World Heritage Site. It was founded by emperor Trajan during the first century AD. The ruins stand as an example of grid plan used by the Romans.

Also known as Al Qal’a of Beni Hammad, this UNESCO World Heritage Site is a ruined, fortified palatine city of Algeria. Located around 225 km southeast of Algiers, it was the first capital of the Hammadid dynasty.

Located in the center of the seaport town of Cherchell, this museum is famous for its Greek and Roman antiques. Exhibits include works by Byzantine silversmiths like ornately decorated patera.

Located near the Algiers harbor, this mosque is also known as “Djama’a al-Kebir.” This mosque was built in 1097 and stands as an example of Almoravid architecture. It is the oldest mosque in Algiers. 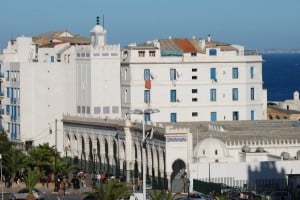 (By Zianide (Own work) [Public domain], via Wikimedia Commons)

Fort Santa Cruz is one of the three forts in Oran, the second largest port city of Algeria. All the three forts are connected by tunnels. This fort was built by the Spaniards. You will find a small chapel, known as the Chapel of Santa Cruz, near the fort.
Travel Algeria – Visiting the Monument of the Martyrs

Founded in 1857, this modern town is well-known for its sandy beach and ancient ruins. It was a military colony of the emperor Claudius. Most of the people in the town speak Berber.

Located in northern Sahara, Mzab limestone plateau is a UNESCO World Heritage Site. It is centered around the Wad Mzab valley.

Tour to Algeria is bound to be a memorable one.