Archives For about Croatia

Croatia is located in Central and Southeast Europe. Zagreb is the capital and the largest city of Croatia. The country has continental and Mediterranean climates. The country has many international airports and is well-connected with the rest of the world. With its more than 1000 islands, Croatia offers beautiful coastline. You will also find historical remains of Roman and Venetian times here.

Here is a brief overview of some popular tourist sites in Croatia.

It is a UNESCO World Heritage Site. The lakes in the region are well-known for their natural beauty. The system of 16 interlinked lakes and a large forest complex around it house many species of flora and fauna.

This narrow white pebble beach is located two kilometer west of Bol harbor. This popular tourist destination is protected as a geomorphological phenomenon. The beach is surrounded by a pine tree grove.

Nicknamed “Pearl of the Adriatic”, Dubrovnik is a walled city that was built on Maritime trade. Its famous walls (that surround the old city), museums, monasteries, churches and fountains fascinate visitors.

The Hvar Island is well-known for its fruit orchards, olive groves and lavender fields. Yacht sailing is a popular activity in this region during the summer months. The Hvar town is set in wonderful natural bay.

This region is one of the largest wetlands in Europe. The park is located in eastern Croatia. It comprises many backwaters and ponds along the Danube. The region houses many species of flora and fauna. Guided tourist visits by boats, panoramic ships, on the horse back or on foot are available here.

It is the second highest mountain range in Croatia. It is located along the Dalmatian coast of the Adriatic Sea between the rivers Cetina and Neretva. This region is a paradise for people who are interested in geology.

This picturesque town is well-known for its pastel colored houses. This fishing port is located on the north Adriatic Sea. Pula and Trieste airports are nearby. St. Euphemia’s Basilica, Zlatni Rt Forest Park and Rovinj Town Museum are some popular landmarks of this town. 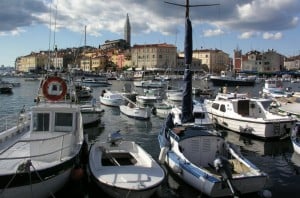 This amphitheater is located in Pula. Constructed in the first century, it is the only remaining Roman amphitheater to have four side towers, with all three Roman architectural orders entirely preserved.

Croatia is a beautiful country. Visit to the above-mentioned tourist sites is sure to be a memorable experience.