Archives For The magic of Dubrovnik 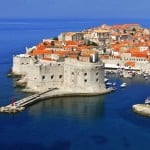 I visited Dubrovnik before the war, and what struck me about this magnificent walled old city was its magic and history. I walked along the ramparts and looked over the Dalmatian coastline, marvelling at the beauty of the Adriatic Sea. I explored the old city, untouched by modernity – and somehow this ancient town stole part of my heart. To this day, I long to return.

If you are lucky enough to visit Dubrovnik, this is what you can expect to see. It’s a description I wrote of the city after it stole my heart… One of the most charming old walled cities in Europe, Dubrovnik has had a tumultuous past, but finally this beautiful city, with its red roofed buildings and high stone ramparts, is at peace. Once again people can come to explore this romantic place, with its maze of cobbled streets and idyllic setting close to the azure sea. Located on the magnificent Adriatic coastline with Italy its nearest neighbour over the waters, Dubrovnik has been famous throughout city for its charm and beauty. Of course, the historic Old Town, which is now designated a World Heritage Site by UNESCO, is quite extraordinary. The city itself is enclosed by walls that were built in the 13th Century, and the buildings inside are just as well-preserved. One of the city’s most famous landmarks is Onofrio’s Fountain, located just inside the main entrance to the Old Town at Pile Gate. From there one can walk to the centre of the Old Town, to the main street, known as the Stradun. This street was originally a channel that separated an island from the mainland. The channel was then filled in, joining the two towns on either side – and that’s how Dubrovnik was formed. Dubrovnik’s Old Town is a real joy to explore. You’ll find all sorts of fascinating places, including a number of old churches, monasteries and museums. Some of those worth exploring include the Sponza Palace, St Blaisius Church, the Franciscan Monastery and the Rector’s Palace. Of course, Dubrovnik is also full of shops, restaurants and bars and you’ll find good ones both inside the Old Town and on the beautiful coastline just outside the city. This is where visitors find accommodation, and also where they come to enjoy the sun and the sea at various marina’s and coves, or walk along a selection of pretty promenades.