Rome’s taxi drivers – a breed apart?
Yes, Rome’s taxi drivers have a bad reputation, and those who overcharge tourists deserve it. But for the most part, the drivers take their profession seriously. They will get you from A to B as quickly as possible, although this may not be the shortest route, and will usually charge the correct rate, a combination of what you see on the taxi meter as well as additional luggage charges. 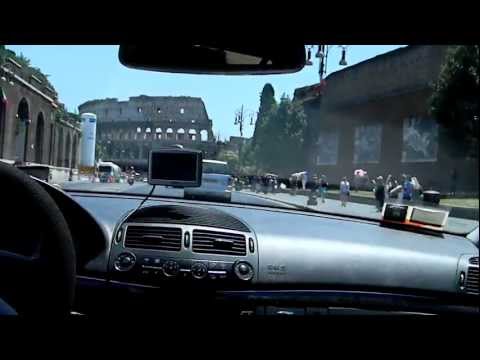 Extra costs – luggage
In most cases, only your first piece of luggage is free and any additional pieces will cost you €1, 00 each. In some cases, the taxi driver will only charge an extra € 1,00 per bag after the fourth piece of luggage, so discuss this with the driver before you embark on the journey.

Extra costs on the meter
Be aware that if you call or SMS for a taxi in Rome, and are given an estimated time of arrival for the taxi, you could be charged a rate for the time it takes for the taxi to reach you. This will be shown on the meter when it arrives to pick you up. However, a new law was put into place from mid-2012, permitting taxi drivers in Rome to charge a set fee of € 3,50 if you have called or sent an SMS for a taxi. In this case, the taxi driver switches on the meter when you get into the taxi, and just adds the extra € 3,50 onto your bill at the end, instead of calculating the cost of how long it took to reach you after you called for a taxi. Be sure to request a receipt of payment when you pay the taxi fare and make sure it includes the taxi’s license number on it.

Choose the right taxi
Rome’s official taxis are white, and have a sign on the roof emblazoned with the word ‘taxi’. You’ll also find the logo of the Rome City Council on the taxi’s doors. All of these official taxis also have taxi meters, and the taxi driver should always have the meter switched on for the duration of the journey. The only time taxi drivers don’t use the meters is in cases where there are set fees. These are used for travelling between the central part of the city, within the Aurelian Walls and the airport as well as between Rome’s central stations or the city’s two airports, Ciampino (used by budget airlines) and Fiumicino (Rome’s international airport).
Fare prices between Rome and the city’s two airports
To find out all the latest fare prices between Rome and the city’s two airports, from central Rome, between the Aurelian Walls, or from anywhere else in Rome, follow this link that includes details in both English and Italian:
http://www.comune.roma.it/PCR/resources/cms/documents/tariffario_taxi_luglio_2012.pdf

Why it’s important to use an official taxi service in Rome
Wherever you go in Europe you’ll be approached by people offering you a taxi service. Sadly, this is why Rome’s taxi drivers have such a bad name. Most often the unofficial taxi drivers are the ones that do their utmost to rip tourists off. Official taxi services in Rome follow a specific protocol, but unofficial taxi drivers do exactly what they want. This is why it’s so important to use Rome’s official taxis instead.
To use an official taxi in Rome, either SMS or call for one, or stand in line at a taxi rank. Don’t try to hail a taxi, because the official taxis don’t stop for passengers. And don’t accept offers from unofficial taxi drivers, unless you’re prepared to suffer the consequences.
What to do if you have complaints about an official taxi in Rome
Write down to taxi’s registration number (number on the number plate) so that you can report the taxi driver to the taxi service or fill in a special complaint form supplied by the taxi service
How to avoid problems with Rome’s taxi drivers
• Make sure you always have the correct change with you when you pay for your fare.
• Count carefully when you pay, to ensure you are giving the driver the correct amount of money. Remember: Italian lire are all of a similar colour, and you don’t want to give the driver too much or too little. (Underpaying will certainly cause a problem!)
• Be careful when disembarking and unloading your luggage to ensure that all your bags are unloaded.
• Give the driver a tip! Although tipping is not expected in Rome, tourists usually do tip taxi drivers. The best way to do this? Let the taxi driver ‘keep the change’.