Frankfurt is the fifth largest city in Germany and the largest in the state of Hesse. It is Germany’s second largest metropolitan region and the largest financial center in Europe. It is also Germany’s most expensive city.

Frankfurt is famous for its futuristic skyline and its airport, which is the busiest in Germany. The city is well connected by rail, road and air. The best way to travel around Frankfurt is the Underground, tram and bus. You may use the S-Bahn for travel to suburbs.

Located on both sides of the Main River, Frankfurt has a temperate oceanic climate. You will find the Taunus mountain range towards the North West. The city contains Frankfurt City Forest,Germany’s largest forest within a city. The best time to visit Frankfurt is late spring to early autumn.

Here is a brief overview of some tourist attraction places in Frankfurt.

It is the main church of Frankfurt. It was constructed during the 14th and 15th centuries. It has been recognized as a symbol of national unity. From 1356 onwards, emperors of the holy Roman Empire were elected in this collegiate church and kings in Germany. 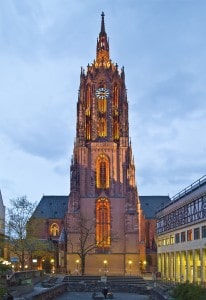 This concert hall and former opera house is a home to the Frankfurt Radio Symphony Orchestra. The building was designed by the Berlin architect Richard Lucae and financed by the citizens of Frankfurt. It regularly hosts concerts and plays.

Founded in 1858, this zoo features more than 5,000 animals of more than 600 species. It covers more than 13 hectares. It lies in the eastern part of the Innenstadt. It is the second oldest zoo in Germany. If you have children, you must visit this zoo.

Romer is the name of a complex of nine houses that form the Frankfurt city hall. The houses were acquired by the city council in 1405 from a merchant family. The Romer was partially destroyed during the Second World War, but was rebuilt later.

Frankfurt is a wonderful city. Visit to the above-mentioned Frankfurt tourism attractions is sure to be a memorable and exciting one.

Here is a brief overview of some popular tourist attraction places in Melbourne.

This famous cricket stadium can seat 100,000 spectators. It is the largest stadium in Australia and eighth largest in the world. It has witnessed plenty of cricketing action over the years. Great cricketers like Sachin Tendulkar and Ian Botham have played in this stadium.

St Kilda is Melbourne’s popular beachside suburb. You can walk, skate or cycle or skate under the palms on the foreshore. You may also windsurf, sail or kitesurf on the bay. You will find many good restaurants like Donovan’s and Circa.

This square includes many buildings that house the NGV Australia and Australian Center for the Moving Image. You will also find auditoriums, exhibition spaces, restaurants, shops and bars.

Birrarung Marr is an inner city park located in Melbourne city. This 20 acre park’s layout emphasizes lines of sight to various Melbourne landmarks like the St Paul’s Cathedral and the Realto office tower. There are barbecue facilities. The Yerra River Trail traverses the park on its south side.

Eureka Skydeck is the highest viewing platform in the southern hemisphere. It is located in Eureka Tower, the tallest residential building in the world. The observation deck includes a glass cube ride that projects three meters from the side of the building.

Australian Open tennis tournament is held every year in this park. Held every January, it is one of the four Grand Slam tournaments. The park also hosts other sports and musical events throughout the year.

Melbourne museum is located in the Carlton Gardens in Melbourne city. It is the largest museum in the southern hemisphere. This famous museum is a place for history, education, society and culture.